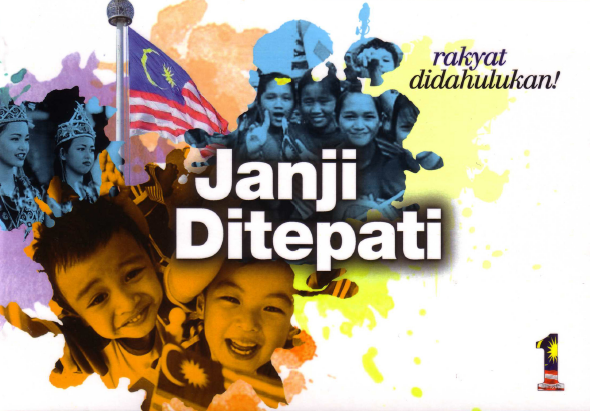 The slogan is easy, “Janji DiTepati” (Promise Fulfilled), but that is enough to make Pakatan Rakyat go berserk.

Most opposition blogs and portals without any shame began to show their anxiety over the slogan.
Somehow, such honest slogan was said to have the essence of politic.
How can Promise Fulfilled be seen as politic ???
Too bad for the opposition when the “Janji DiTepati" theme is used in advertisements to promote various aid which was given by the government, and now it is taken to be the theme for our national Independence Day.
It seems to be very painful for them to accept this slogan.
Well, probably because they are still have not fulfill any of their promises.
Just look at Kampung Buah Pala, Penang where PR promised that they would solve the people's problem within two weeks, but the kampung ended up vanishing in the end.
And who can forget the September 16 Promise.
Or the promise to implement hudud in Terengganu if PAS rules in 1999 GE.
Some even promised 'heaven' but all there is would be 'heaven on earth' where it is filled with massage houses, karaoke centres, gambling centres and nightclubs which are growing rapidly in states which they are ruling.
Even then, the opposition kept on making promises.
Up until today, they kept on throwing promises, free education, reduced oil price, disbanding of tolls and various other illogical promises.
When the fact is, even after three years of managing a few states, opposition still fail to fulfill their manifesto, including the easy ones.
For example, water tariff in Kedah and water supply in Selangor.
Even when numbers had shown that their promises are illogical, thet kept on making the same promises.
Why ???
Is it because that is the only thing they can do ???
Making promises, not fulfilling them.
And by going berserk, it gets clear that the opposition knows that they are unable to fulfill any of the things that they have mentioned to rakyat.
That is why they fear of ‘janji ditepati’.
The fact is, ‘janji ditepati’ is the government's slogan, not UMNO and BN.
It is a statement to describe the commitment taken by the government to serve its people.
And the commitment had shown its results where rakyat manages to enjoy various benefit.
We should not link the slogan with politics, like how the opposition wishes to see it.
It is the truth.
Unless the slogan says 'janji ditepati' but no promises are fulfilled.
But today, we have received almost everything which had been promised by the government, so, why should we question the theme ???
The opposition can accuse that the slogan is political, but what is important here is honesty, which the opposition do not have.
That is why they are going crazy over the theme of our Independence Day this year.
Posted by Info 4 The Truth at 12:00