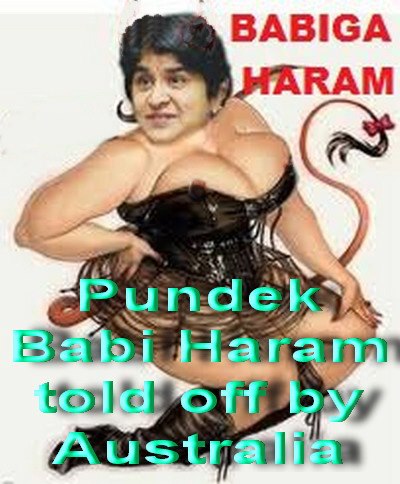 It has been publicly said, Australian Foreign Minister Bob Carr said it in Parliament that the Malaysian government has argued the last general election must have been fair, it lost its two-third majority.

And now the ball is in Ambiga’s feet to clear the air with Malaysians, to tell it the way it was told in Aussie Parliament, no twisting and no spinning.

Ambiga and Bersih are one and if Ambiga continues with her allegations, it is obviously that she is being used by some people or some political parties to create problems with the ruling party.

Malaysians at large know this and have seen the problems created but what they want is Ambiga herself to realize unless she herself wants to be leader of the oppositions.

This, Malaysians have seen and now they are waiting whether Ambiga would participate in the coming general election as a candidate for the opposition or not.

Either way, Malaysians know who is Ambiga and why she has been creating uneasiness and problems for the ruling party.

After all, Malaysians are no longer those who stay under the shell, they are now open and critical, they know how to read in-between the lines.

They have access to so many things through the internet and friends and they know who is sincere in trying to raise their standards of life and who are just making promises without fulfilling them.

Given the scenario and truth behind the issues played by the oppositions, it is better for Ambiga to just tell the truth and not hide her motives.

The Aussie Foreign Minister’s statement is being read by millions of people all over the world and if Bob Carr said it as it is, Ambiga cannot deny and said otherwise.

Ambiga was in Australia to solicit support but she got what she did not expect – the truth – and she cannot deny the truth.

Unless of course, she is indepted in any form to some foreign masters or some opposition leaders who she is forced to be loyal and sacrifice herself to redeem her depts.

So it is now to Ambiga to be truthful to herself and Malaysians although the truth is bitter.