SUARAM (SUARA ANAK HARAM) CAUGHT RED-HANDED LYING AND IT HAS BEEN CONFIRMED BY THE PROSECUTOR !!! 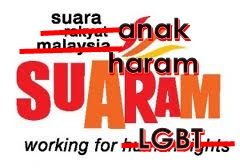 SUARAM, an NGO which is led by Malaysian opposition and funded by Zionist and Soros has been revealed to be lying again and again in the issue of Scorpene.

Despite of all that, they still refuse to admit their lies and they kept on playing with their game.

Perhaps because the fund which they are receiving is simply too much, so SUARAM a.k.a the opposition do not have any other choice but to keep on acting with hope that the government of Malaysia would finally fall.

But, with statement made by famous French prosecutor, Yves Charpenel which was released yesterday, saying that there was no trial regarding Scorpene in France and the only thing that is happening is trials made by Malaysian opposition media, is seen as the end to SUARAM's chain of lies.

Charpenel also repeated government's previous statement that what happened was that two independent 'investigative judges' has been investigating this issue since earlier this year based on complaints made by SUARAM.

This is because according to the law, all complaints should be given serious attention and investigation in closed and private manner.

However, the investigative judges do not have the rights to investigate nor interrogate people from across the border without getting any permission from the country's government to respect the Mutual Legal Assistance Agreement which is held by all countries in the world.

That is why, for SUARAM and opposition to say that the trial is going on and a few people would be given subpoenas and submarine documents in French language would be revealed as part of the evidence, showed how low the moral value among SUARAM supporters really are.

In line with attitude of Zionist and Soros, SUARAM had shown that they do not respect any government in the world including Malaysia and France.

Not just that they are tarnishing the image of Malaysian government, they are even toying around with the French government.

In order to ruin Malaysian government, SUARAM pictured court of France for not being transparent for leaking investigation's information including evidences to them which they them showed to the public.

SUARAM also pictured French police as an organization that is not efficient enough as they could not detect the entrance of Altantuya during the whole business transaction period.

And now, SUARAM and Malaysian opposition refuses to admit that everything is over.

Instead, Anwar Ibrahim, Malaysia's Opposition Leader had brought in French lawyer, William Bourdon to provide statement on behalf of SUARAM in the issue of receiving foreign funds.

Bourdon's arrival should have been paid and it sure was huge, as he is the famous lawyer who defends George Soros.

Instead, they are on the move to implement the mission of 'regime exchange' in Malaysia for the sake of Soros and Jews by lying, with no limit.