PAS KUALA SELANGOR DIGGING THEIR OWN GRAVE !!! WAY TO HELL !!! 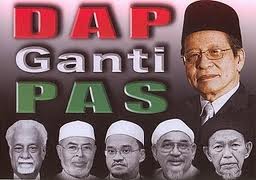 I think everyone is aware that the current MP of Kuala Selangor, also held the position of the Director for Research and Development in PAS.

I have gotten some news that the Kuala Selangor MP, has made a call by choosing Haji Razali Tumirin as candidates for the upcoming GE-13.

Reason provided – Haji Razali was said to have the skill to govern and his knowledge is significant for the role..

Except everyone knows that Razali Tumirin is the MP’s crony!

I mean.. it is sooo obvious!

And.. in his decision to choose Razali, he has automatically denies the PAS member chosen candidate, Rashid Kassim who is also the current YDP for PAS Kuala Selangor.

Based on recent info that I have got from my friend Pena, apparently there was a meeting held about 3 weeks ago to discuss the issue on the candidate chosen by the Kuala Selangor MP..

It was said that the 2 PAS leaders, Rasshid Kassim and Ustaz Ahmad Alang will be putting all the efforts within their power to put pressure on Dr. Dzulkefly Ahmad, and not proceed with Razali as the candidate for the State Assemblyman of Jeram for GE13.

We can see that their internal conflicts not only within PAS but within PKR as well are at a chronic stage and Dr Dzulkefly Ahmad who is accountable and has the responsibility to look into this matter has failed to do so !

Come to think of it..

He has also failed in his current role as the MP of Kuala Selangor and now..

He is clearly not competent to manage the conflicts internally within PAS.

This is just the internal conflict in PAS..

Would he be competent to handle the conflict if PAS was not given a seat in Kuala Selangor ??

Can he manage the pressure and future conflicts with PKR and DAP ??

THE QUESTION – DR DZULKEFLY AHMAD.. IS HE A COMPETENT CANDIDATE FOR THE NEXT MP OF KUALA SELANGOR ???

Something to ponder i belief…

KLIK YOURSELF to read more...