ANU-WAR ADMIT HE IS BISEXUAL AND NOT HOMOSEXUAL - FAIRFAX MEDIA ?!! 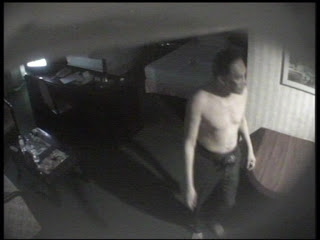 As Anwar supporters still confused trying to deny the video of Anwar's interview with BFM which shows that Anwar goes against those who discriminate LGBT and think that it is ones' personal matter, another video involving Anwar shows the same message, regarding the issue.


The video can be watched via this link: CLICK HERE

It is a video of Anwar's interview with Fairfax Media from Australia which is published on March 6, 2013.

The article on it was written by Lindsay Murdoch with the title 'Anwar to end 'xenophobia' and promote freedoms'.

Xenophobia is a psychological problem which is linked with irrational fear on something that is foreign, including foreign people or culture, or anything that is out of the person's own cultural norm.

This Australia media clearly acknowledges Anwar that they refer to Anwar as Dr. Anwar, charismatic leader.

However, during the interview, Anwar somehow criticized Australian politicians who complimented Malaysia's development as they visited the country.

Anwar said, "They are only shown the Twin Towers [in Kuala Lumpur] or the longest bridge or the largest dam, they are not shown, for example, ethnic Indian Malaysians living in disgusting conditions on dilapidated estates."

Generally, Anwar criticize everything in Malaysia and describe everything as bad, undemocratic, non-transparent, iron-fist, uncivilized and any bad word that he can think of.

According to him, Malaysia being led by him will see a lot of better changes based on the things which he will implement.

This include, he will allow freedom of religion to everyone including Muslims where they are free to convert to other religion if they choose and this include the controversial enforcement of syaria law.

However, he then stressed that the law will be re-evaluated and any clause regarding crime will be limited, perhaps it will only subjected to a few states.

Anwar also stated that the democracy system under him will be from the example of India, Philippine and Indonesia.

Just like any other politicians who wants to raise Chinese votes, Anwar accused that the current economic plan is biased towards bumiputera alone instead of other races.

At the same time, also being like any other politicians, Anwar failed to explain in detail about his claim through numbers and statistic regarding the division of the national economy to prove his claim.

What is more interesting about this interview is that Fairfax Media published the picture which shocked Malaysia for a few hours, the picture of a Bersih participant, known as Suhardi who was claimed to have died, to strengthen the point of saying that the government is cruel.

Fact is, it has been proven that Suhardi's 'death' was proven to be a lie which has been planned by Anwar when Suhardi was found alive and well in his house.

It is even worse when Suhardi admitted that he 'acted' for three times to gain attention from photographers but he failed to do so.

Fairfax Media should feel embarrassed for publishing Suhardi's photo before checking it's credibility.

If they cannot do this, it is not surprising why they assisted to send the message conveying Anwar's confidence that he will be replacing Datuk Seri Najib in the coming GE.

It seems like both Anwar and Fairfax Media, do not have credibility and integrity.

Anwar then stated that there has been changes in Malaysian's sentiments and he is confident that this is the end for Barisan Nasional.

However, Malaysians are aware that Anwar is the one who's dying, not BN, when one by one Sulu terrorists in Lahad Datu are killed and a few have been dragged to court.

That is why, Australian media can believe and write as they wish, and Anwar can say anything he wants to foreigners.

Malaysians however, are not scared of foreigners nor foreign media because they cannot vote here.

Malaysians are only scared of Anwar gets to lead because he swore that he will spread freedom in form of confusion for religion, just like what is happening to Indonesia, India and Philippine, which will lead to moral decay, as well as values of family, community and humanity.

Plus, Anwar can't even deny straight ahead when been asked either he is homosexual or bisexual.

Well, why did Noelle give him with this 2 option ??? 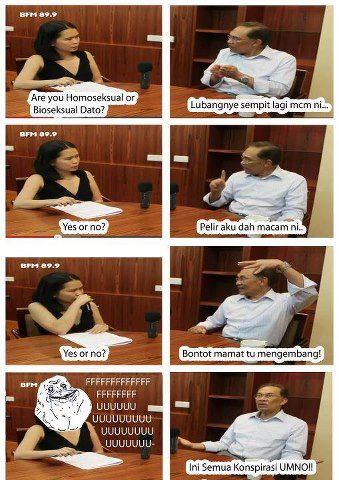