A FURTHER INVESTIGATION SHOULD BE TAKEN AGAINST KEDAH STATE GOVERNMENT (PAS) !!! 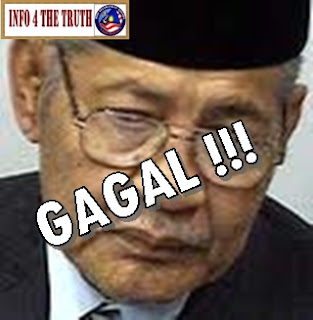 Most of of Audit Report on states that are ruled by Pakatan Rakyat shows various weaknesses and they do not even show any transparency nor performance that is better than Barisan Nasional unlike what they have bragged.

Despite that, it does not seem wrong to say that the weakness on Kedah's administration is actually stands at its own class - the lowest between all other states because the it simply does not make sense. 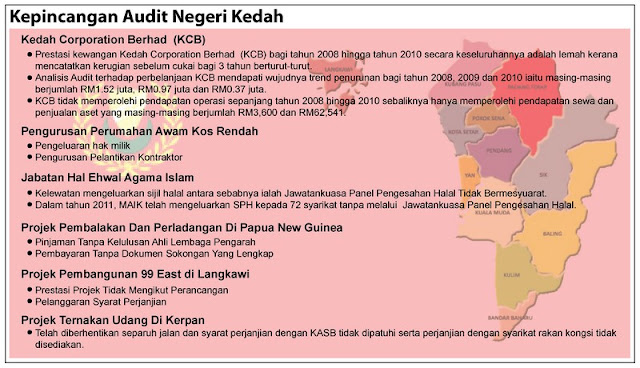 Even though we are well aware with PAS Kedah's bad management, the information which was revealed from the 2011 Audit is just too much.

We do not understand how can a state government could possibly missed basic essentials such as contractors' license, in awarding project which cost millions of Ringgit.

This matter involves 5 contractors which were responsible to run maintenance project worth RM2.55 million in 2010 and 2011 for a few Public Housing projects.

The contractors were not licensed, it was also believed that they have family ties between one another.

Not just that, the audit also found that RM500,000 was paid to the contractor via other company's bank account and registered number.

The audit also found a few repeated claims in the same voucher for the same home at the same place, which then showed that the work which was certified to be finished was not even developed and that it does not even exist !!!

Besides that, the audit on Logging and Farming project in Papua New Guinea also causes confusion.

The criticized project which was dubbed as risky involved offshore loans worth USD44 million which was taken from Capital Investment Agency (CIA), a finance consultation company in London.

We do not know how and why, such big loan was signed by the Managing Director of the project without even getting any approval from the Board of Directors.

Even payments had been made to the consultation company as well as legal fees even though the project was cancelled.

The Audit also found that loan worth RM3.01 million from 5 other companies to cover the cost in Papua New Guinea has been made by the Managing Director without any approval from the Board of Directors and the loan was taken without any agreement nor a complete support document.

The same thing goes to Projek 99 East in Langkawi which caused Kedah Corp. Berhad suffer huge loss only on such illogical excuse where they had broken the agreement, without any concrete reason.

I do not want to say as much, but all of these would be enough for us to know how PAS rule.

What we can see here would be the values of cronyism, corruption, incompetence and weakness for the whole of PAS Kedah's administration system.

As if they do not have a clear system regarding approval for projects which then lead to people putting aside the state government and the Chief Minister in making decision including using rakyat's money worth millions of Ringgit.

This also proves that Azizan Razak's leadership means nothing to them or perhaps he does not know anything about his state such as who is spending the state's money, for what it is spent and the result.

Overall of the audit also show drastic fall in excess income from more than RM20 million in 2010 to only around RM2 million for 2011.

The excuse which was given was then the money was used to cover administrative cost.

But, it seems that most of the money had been used for projects that are risky and costly that they finally failed, all because of such weak administration and corruption as well as cronyism.

Rakyat of Kedah should push for a further investigation to be imposed against those who had cost such huge loss for the state.