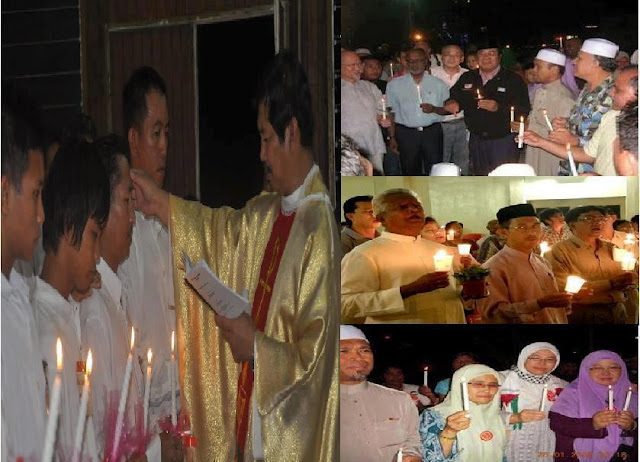 The life of PR has always depend on how great their lies to rakyat are, not to mention their sweet promises as well.

As for now, a few of PR branches have been caught red handed for cheating such as SUARAM and BERSIH.

SUARAM's lie had forced Cynthia Gabriel to take back her statement and denied that there was a trial proceedings regarding the purchase of scorpene and admitted that the story of subpoena was just another lie.

BERSIH in the other hand somehow made a fool of themselves when Ambiga Sreenavesan acted by committing treason to her own country by asking Australians to 'colonize' Malaysia by intervening in our GE process.

Australia however rejected Ambiga's proposal on reasons that the application was made on baseless reason after looking at the facts and figures of previous GEs.

But, aren't they tired of getting caught red handed all these while ???

No, because without lies, the party would simply die.

The effort to bring down the government through the back alley would need to go on to ensure that PR would be in power.

Considering that demonstrations which they have been doing all these while do not really give any positive impact, the only option left is to keep on denying that our election is clean and just, which would provide them more excuse to rebel if results do not go their way.

For that, PKR's Deputy President, Fuziah Salleh was given a vital role to keep on lying by saying that there are serious issue in transparency in the voters' registration process.

EC became their 'punching bag' and it is being beat up just to ensure that the opposition could keep on living.

Then stories such as Hasmidah Surahbil with IC number 820315-12-6446 who is said to be a temporary IC holder but listed as a voter by EC was made as a big issue by PR media.

For your information, Hasmidah was not the first person which was politicized by PR.

A few others were also used as tools to tarnish the government's image.

Despite that, EC today made a statement that Hasmidah applied for citizenship in 2002.

The application was approved in 2007 and she received a legitimate Mykad.

What is shocking or perhaps not that shocking for her case is that based on the voters' registration form which Hasmidah filled out, it was proven that it was made by Registrar of Voters, a political representative from Pakatan Rakyat.

It is clear that Fuziah simply acted too much that she would use such cunning strategy to ensure that her party would gain power.

Other lies include PR saying that there were 63 cases where MyKad with codes from foreign countries were used at DUN Gombak Setia and after being checked out, it was found that half of them were registered by the Registrar of Voters, a political representative from Pakatan Rakyat.

Thus, why would PR raise those issues if their own representative was the one who registered those voters ???

Malaysian election system requires EC to check all of the names for those who applied to become voters with National Registration Department (NRD) and they need the approval as citizens before they can become voters.

If there are doubt or mistakes, then complaints and objection must be made so it can be corrected.

It is true that the system cannot guarentee 100% perfectness during the voters' registration process.

That is why each political representatives should be there to observe the voting process until it is done.

If there are doubts, then objections or actions can be taken directly, at the same time.

Thus, PR should not have kept on making complaints on the result of election because they have a lot of time to assist EC to ensure that the voting process would be done in a clean and just manner.

With this information, rakyat should not fall with all the lies made by PR especially when it comes to them blaming EC when the coming GE results do not go their way.

Do believe me that this is just part of their early strategies to take over this country even if they lose during election.